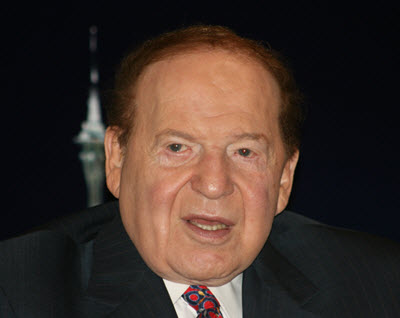 Sheldon Gary Adelson is a supremely successful Boston-born investor, chiefly known for his work in the casino industry – both in the United States and abroad. A bona fide serial entrepreneur, Adelson has founded around 50 businesses so far.

He is also known for his philanthropic pursuits, including funding the private Dr. Miriam and Sheldon G. Adelson Medical Research Foundation in his birth town Boston. Through this foundation, he initiated the Adelson Program in Neural Repair and Rehabilitation (APNRR), donating a combined $7.5 million to researchers from ten different universities.

An entrepreneur is born with the mentality to take risks, though there are several important characteristics: courage, faith in yourself, and above all, even when you fail, to learn from failure and get up and try again.

Entrepreneurship is essentially identifying the path that everyone takes; and choosing a different, better way.

Sheldon Gary Adelson was born in 1933 and grew up in the Dorchester neighborhood of Boston, Massachusetts. The family was low-income. His mother Sarah Adelson (née Tonkin) ran a knitting shop and his father Arthur Adelson was a taxi driver. Sarah had immigrated to the United States from England and was the daughter of a Welsh coal miner, while Arthur was of Ukrainian Jewish and Lithuanian Jewish ancestry.

At the tender age of 12, Sheldon Adelson borrowed $200 from his uncle and purchased a license to sell newspapers in Boston. Four years later, he borrowed a substantially bigger sum – $10,000 – from his uncle and set up his on candy-vending-machine business.

Adelson attended City College of New York but never graduated, and his stint in trade school, hoping to become a court reporter, didn’t work out either. After this, Adelson joined the army.

After his discharge from the army, Adelson founded a business that sold toiletry kits. Eventually, he also created the company De-Ice-It and began selling a chemical spray that could help clear frozen windshields. In the 1960s, he started a charter tours company.

Adelson quite rapidly became a millionaire, but by his 30s he had already built and lost his fortune – twice.

In the late 1970s, Adelson developed the COMDEX trade shows together with his business partners. Throughout much of the 1980s and 1990s, COMDEX was considered the most important trade show for the U.S. computer industry.

In 1995, the SoftBank Corporation of Japan purchased the whole Interface Group Show Division, which included COMDEX, from Adelson and his partners. The purchase price was $862 million, of which Adelson received over $500 million.

In 1988, Adelson – in collaboration with business partners – acquired the Sands Hotel and Casino in Las Vegas, Nevada. Soon, they had created the Sands Expo and Convention Center. Back then, it was the only privately owned and operated convention centre in the whole country.

In 1991, Adelson got the idea to create a resort hotel and casino inspired by the Italian town Venice. Soon, Sands had been demolished, and over the following years, $1.5 billion was plowed into the construction of The Venetian.

In 2003, Venezia Tower was added to The Venetian, providing the establishment with over a thousand new suits, 18 restaurants and a shopping mall with canals, gondolas and singing gondoliers.

In 2006, Adelson’s company was awarded a slots license by the Pennsylvania Gaming Control Board, and the casino resort in Bethlehem, Pennsylvania opened three years later. Table games were added in 2010 and the hotel part of the resort wasn’t available until 2011. This Casino is likely to get a license to operate an US online casino. This will increase the value of the casino dramatically.

When it opened in May 2004, the one-million-square-foot Sands Macao was the first Las Vegas-style casino resort in Macau, and consequently also the first one in China as a whole. Macau was already a well-established gambling city at this point, but the resort-style gambling characteristic of places such as Las Vegas and Atlantic City had not yet arrived until Sands Macao opened its gates.

In December 2004, the Sands Macao company went public and was met with strong interest from stock market investors. For Adelson, who owned 69% of the company shares, it meant a substantial increase in wealth.

In August 2007, the $2.4 billion Venetian Macao Resort Hotel opened in the Cotai part of Macau, trailblazing the development of the Cotai Strip casino resort area.

In 2015, Sands Macau agreed to pay a $9 million settlement to the Securities and Exchange Commission after being accused of violating the Foreign Corrupt Practises Act. The settlement included no admission of wrongdoing.

In 2006, Las Vegas Sands was awarded the much-coveted license required to build a casino resort in Singapore’s Marina Bay, and four years later, Marina Bay Sands opened. At the time of writing, this resort includes 2,500 hotel rooms, multiple pools, more than one nightclub, plenty of stores, and a combined convention centre / concert hall.

In 2016, Adelson was included in a listing of the top-100 people positively influencing Jewish life. Among other things, the Adelson Family Foundation has contributed $140 million to give Jewish youth the opportunity to visit Israel. Other examples of endevours supported by Adelson are the Yad Vashem Holocaust Martyrs’ and Heroes’ Remembrance Authority and the Friends of the Israel Defense Forces.